skip to main | skip to sidebar

We thought we should start off our blog by introducing ourselves and how we all came to live together.


This is Baby Poe, he is the youngest at just over a year old. Momma found him as a kitten when she lived on a farm in NC. He father, Henry was a stray that momma feed. He was very friendly and when momma moved back to Florida she brought Henry and Poe with her. But Henry, not being used to being indoors escaped and never came back. It made momma very sad. But we cheered her up. Poe is very active, like most kittens and he tends to grab all the new toys first to test them out. His best buddy out of the sibs is Dakotah. 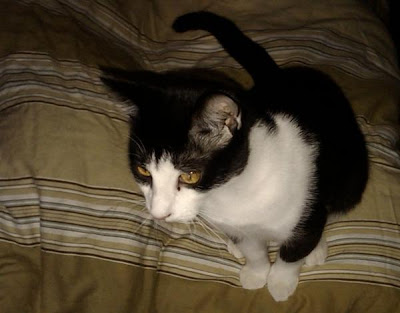 This is Peenie Weenie, or just Peenie for short. Momma took in 2 pregnant strays. Peenie is the litermate to Farf. Peenie is very very smart. He LOVES watching the Harry Potter movies and has each one on DVD (we're not allowed to touch them). He will watch the entire movie, sometimes without blinking. He also loves to watch the space shuttle take off. Momma has to pull up the NASA website so he can see what's going on at Mission Control. He used to like watching horse racing too, but when we lived in NC momma introduced him to a real horse and he realized just how big those suckers are, so he's not to interested in them anymore. MOL! He's also a junk food junky. Loves potato chips, cheese flavored Doritos (god forbid momma buy the ranch flavor) and popcorn. But he will only eat it if he can pick the piece out of the bowl himself. 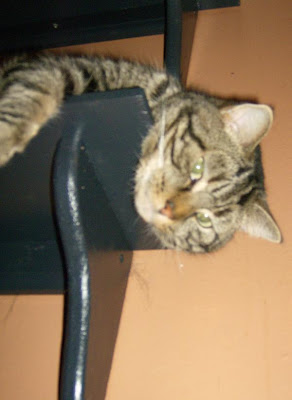 This is Farf, short for Farfegnugen, the German saying. He is Peenie's litermate.Farf looks like a Maine Coon, but he's small. He's best buds with his brother Peenie and Booger. He also likes to give Perdy our Great Dane dogsib back rubs. 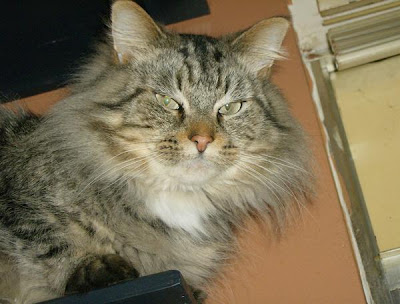 This is Gizmo. He is one of Daddy's cats. He's an older gentleman, but very nice. He doesn't bother us, so we don't bother him. He's pretty picky about what he likes to eat and will only eat Fancy Feast Flaked seafood. Unless of course momma has fresh cooked chicken. 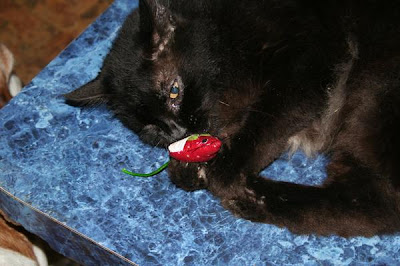 This is Opie, he is the littermate of Pudgey and Dakotah. There was one other litter mate, Bandit, but he passed away last year. Momma was terribly sad after that, and she still gets misty eyed when she thinks about him. Opie is the oldest of the remaining 3 brothers. He's momma "Ommpa Loompa'. The sweetest boy of all. 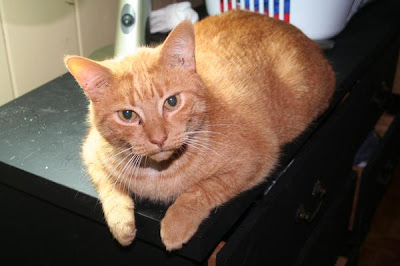 This is Booger, or Boogey Woogey as momma calls him. He was born to the 2nd pregnant stray that momma took in. He was the only one of his litter to survive.Momma carried him around in a pouch and bottle fed him. The vet said that he wouldn't survive, but momma proved him wrong. He has asthma and momma has to give him medicine and breathing treatments every now and then. He loves loves loves spaghetti and mashed potatoes and gravy. This is Dakotah. The youngest of the 3 brothers. As you can see he has beautiful blue eyes (and he won't let you forget it) He loves to sleep on momma when she's sleeping. He likes to sleep on her legs so she can't go anywhere. He likes any kind of people food as long as momma hand feeds it to him. He also loves fresh blueberries and will steal them when momma isn't looking 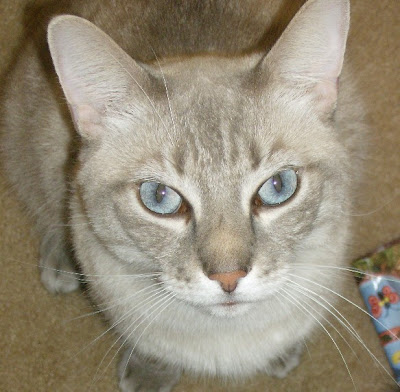 This is Triage, another one of Daddy's cats. Triage is ANCIENT!! He is somewhere in his 20's. That's people age folks!! He is also the only one of the cats that goes outside. Momma doesn't like him too, but at his age he doesn't go far. He can't really hear, unless momma opens a can of food. He's a nice old chap. Loves to snuggle with momma or daddy, even Perdy or cat loving Great Dane sib. 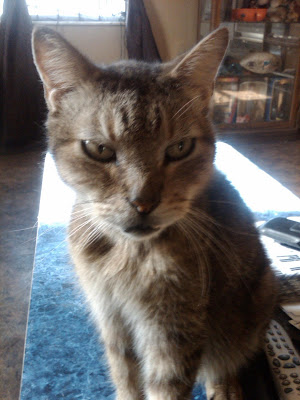 This is me, Pudgey. I'm the middle brother to Opie and Dakotah, and the most handsome, at least I think so. I'm Maine Coonish, as was my older brother Bandit (he was blackish though). Momma cant believe that we all came from the same litter because we're all so different, but we did. Momma named me Pudgey because when I was born I was twice the size of every one else, still am. I weigh around 22 lbs, but that's only because I'm big boned and covered in fluff. I tend to pick on the smaller cats, just because I can. Momma yells at me for it. 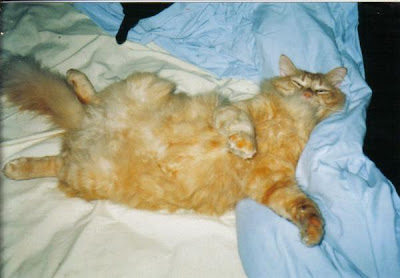 Rocky has told us a lot about Twitter and his blog and about all the friends he's made. So we asked momma if we could have a Twitter account and blog of our own. At first she said that one animal Twittering and blogging was enough, but we hacked up enough furballs and pooped in all the right places until she finally gave in. Never under estimate the power of perfectly placed poop. Because of all of Rocky's new anipals as he calls them, we got some pretty great new toys that his cat friends recommended. Like the infamous Ratsies and now the soon to be infamous duckie. We all got Ratsies and enjoyed them very much. Just last week Rocky bought us a duckie with his allowence. We LOVED it, and momma needs to buy us each one now. We are all looking forward to joining the Duckie club if someone would be so kind to point us in that direction. Momma also just bought us this new toy called UnderCover mouse. Fantabulous!! I think Rocky said that IamButton's recommended it. We must find this Buttons catperson and thank him. Momma is going to take some pictures of us playing with our new toys and post them here on this blog. So please check back to see up in action.


P.S. We picked this template because of all the dots, we thought it was very Larry King like. I have no clue who this Larry King person is, but Peenie said he is very famous.

Posted by FelinezGalore at 11:59 PM 3 comments:

FelinezGalore
We are the 9 catsibs of Rockum Sockum. We let the dogs think they rule the house, but we know that we are the true Rulers of the Kingdom